Up For The Challenge

Get to Know Sydney Sweeney, the star of HBO’s Euphoria.  We spoke with Sydney about what we learn from the no’s, why we must create our own opportunities, and how our challenges can be the biggest motivation of all. Read on below…

Erin Walsh Hello Sydney! Thank you so much for taking the time to chat with us- we are so excited to feature you! I would love to start at the beginning, I understand you convinced your family to let you give acting a go and moved across the country. Can you tell us a bit about that and your beginnings in the industry?

Sydney Sweeney Thank you for having me! I have very supportive parents who always let me to dream big (this might’ve been a little more than what they were expecting though). They sacrificed a lot believing in my business plan! The first few years in LA were actually really hard on my family. It’s way more expensive than where we are from, and that was difficult, and there’s about a million other girls that had the same dream who were always prettier or better than me… I wasn’t super confident as a preteen/teen so I’d feel defeated quite often.

EW How did you find your footing and navigate crucial things like finding representation, negotiating deals- I just imagine arriving in this town without really understanding the dynamics- it must have been a huge learning curve…

SS My mom was amazing at researching anything and everything; I inherited that from her. But when you arrive here, it is just a giant learning curve because there’s so many things people say you have to do, as in workshops, classes, pictures, and it all costs money and it drains you. It took finding the right group of friends and mentors to guide me and my parents in the right direction.

EW Tell me about growing up in front of the lens. Was it enjoyable for you? And did you have to define a space/ method for yourself that was “safe”? I mean this is the sense that sometimes child entertainers have this obligation to perform. Was this ever an issue for you?

SS I think I’m glad that I didn’t hit my success as a teen or child because I wouldn’t have been ready or as confident in myself as I am today. I was in front of more casting cameras than actual cameras growing up, and as much as I loved it and learned so much from that, it tears you down as a teen girl. You get told “no” so many times, and then add on top just being a teen girl in itself and discovering who you are is its own thing. My safe space/method for when I was younger would be to escape by being outdoors, which is still the case. But acting-wise, I’ve just been able to separate myself from my characters enough that I don’t get sucked in.

EW Let’s talk Euphoria. You had been acting for some time before this movement arrived and shook us all. What a beautiful, layered, wonderfully dynamic and surprising beast of a show. Can you tell us how this project came about for you and give us a bit of insight into how you found Cassie?

SS I believe I had just finished filming The Handmaid’s Tale, and was back home in LA. I was up for this other show when I got sent the audition for Euphoria. I was actually really nervous about it in the beginning. I’m from a small town and I knew my family would have a hard time with my content in it. But when I read the pilot, I saw how powerful this show could be and the connection I felt with Cassie. So I put myself on tape and got it!

SS I mean the whole show is kind of crazy in itself.

I love creating things from the ground up.

EW Euphoria- It’s all just so REAL. Your interpretation is so raw and unforced. As an actor, what helps you find a character, physically and emotionally? And in projects like this that are quite heavy at times, is it easy for you to leave the character and the work behind at the end of the day?

SS I find my characters through building them and looking at them as real individuals. What memories or people made them behave or respond to things the way they do now. Anything I can think of I try to create with them. It also makes it easier to transition in and out of the emotional rollercoaster of Euphoria.

EW Tell us about your film Nocturne. I personally can’t handle scary movies, but I feel like Pandemic time is the right time for a little distraction material…

SS My dad has always been a fan of scary movies, so I’ve found I’m drawn to them as well! They’re fun to watch and just a fun time to film. Nocturne is a psychological thriller, my character Juliet goes to this institution for classical music and lives in the shadow of her twin sister.

EW I understand you are venturing into the world of producing! How exciting- I am not surprised, because the moment we met it seems so obvious that you will also direct one day- you have such an instant grasp of things, and such great insight into how to better and perfect situations, which I imagine goes into your filming work too. How did your production company, Fifty Fifty Films come about? What is coming up next for you, and what are you hoping for in the next 5, 10 years?

SS Thank you 🙂 Producing combines a lot of my interests. I’m a school nerd so love the business side, and I love creating things from the ground up. I was able to really focus on building my company and developing projects this last year. Recently, I announced The Players Table, which was the first property I had found last year and took out! Now we have Crazyrose on board as well as the amazing film maker Annabelle Attanasio, and I’ll be staring alongside Halsey. I have a few other projects as well, but can’t announce them yet.

EW How have you been spending this quarantine time? Any off time or what has been keeping you busy?

SS My company has luckily kept me busy this past year, developing projects, and reading a lot of books. I would’ve gone a bit stir crazy without it. My dog, Tank, has been soaking up this quarantine time! She’s been loving all the attention and we go on 5-6 mile walks everyday now. 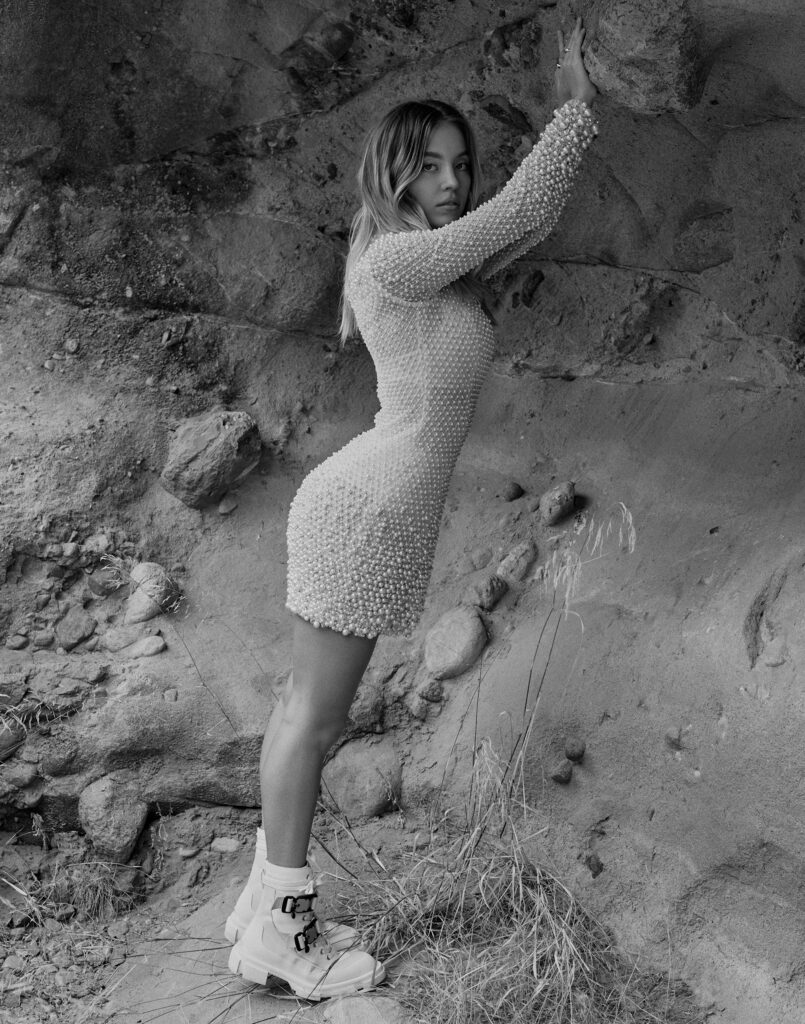 EW What has been keeping you SANE?

SS My dog, working out, and reading.

EW Tell us a bit about some of your exploring- our readers should know that you agreed at our shoot to hike without hesitation to some random caves a good trek away that was covered in bees. You seem to be quite the adventurer.  How does this kind of movement feed you on another level?

SS I feel at home when I’m out on a hike or in the water. If there’s a tree I will most likely try to climb it, or if someone says “you can’t climb that rock” I will probably be at the top of that rock within minutes. There’s such a thrill with going on adventures and pushing yourself physically and mentally. I was lucky to have grown up in the Pacific North West where we have access to such beautiful land to hike and explore, so I try to do that wherever I am. 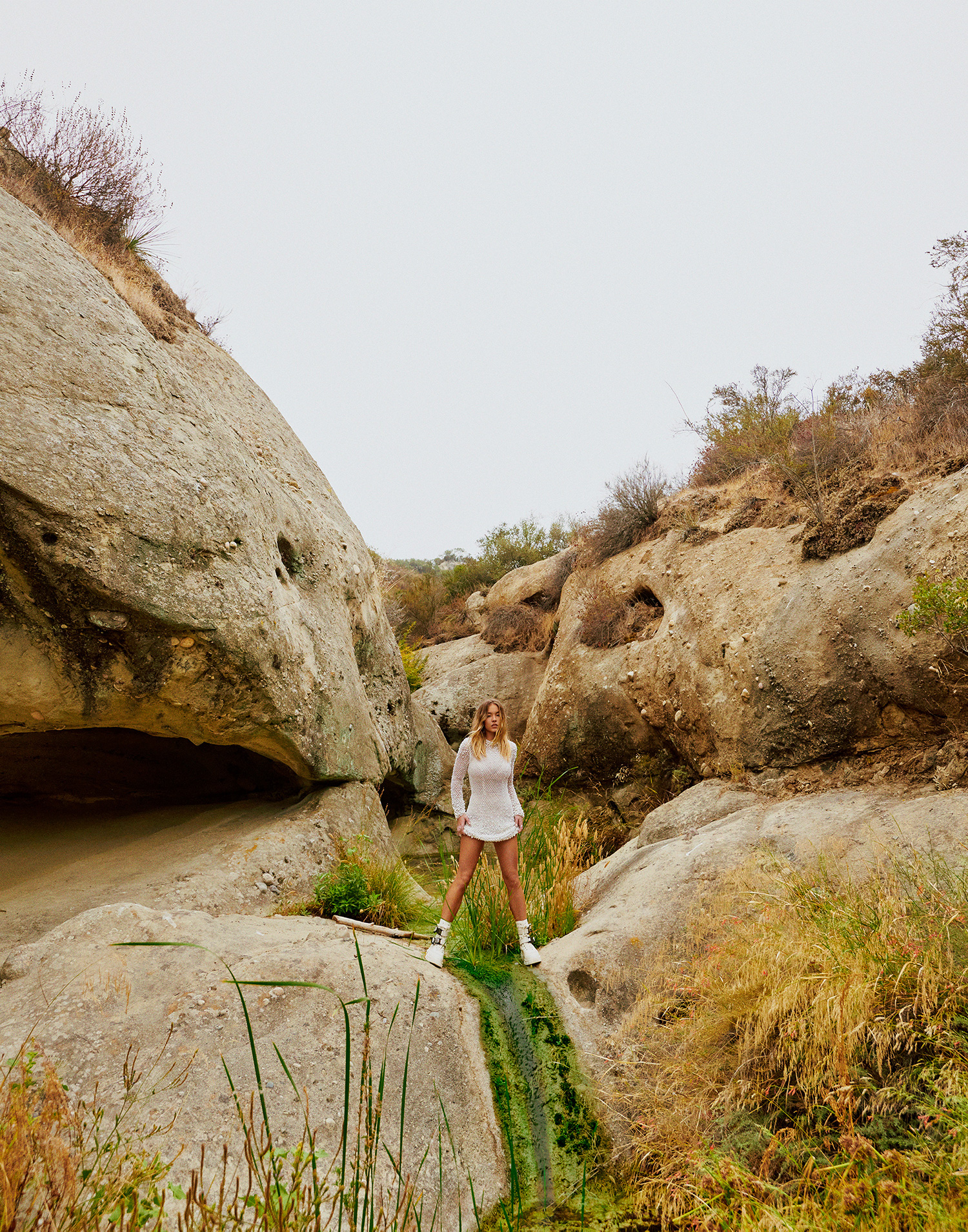 EW Any books we must read?

SS I have to plug They Wish They Were Us by Jessica Goodman. It’s the book I’ll be producing through my company along with Jean Marc Vallée and Nathan Ross’s Crazyrose.

EW Films we must see?

SS I’ve been obsessed with early 2000’s romcoms these past few months. They’re so nostalgic and I’m also a helpless romantic. So any of those you have to put on!

EW Where must we go hike?

SS Okay, I’m debating whether or not to give my favorite LA spot away and I’m afraid to!! It’s a crazy hike with cliff jumping and rock climbing (it’s where I take my first dates to see if they pass my test haha). Malibu has some great spots to offer.

EW What causes are you keen to support these days? I do think it is important with a sizable platform to pay it forward by example- how do you do this?

SS I’m a huge advocate for education, and providing schooling and means for kids in need. I’ve been wanting to go volunteer around the world. I rescued my dog, Tank, and I’ve grown up helping at shelters and donating time and money to different foundations to help save dogs. There’s so many loving animals that need homes and I wish I could take them all.

EW Sydney, what’s your SBJCT? What really motivates and drives you? 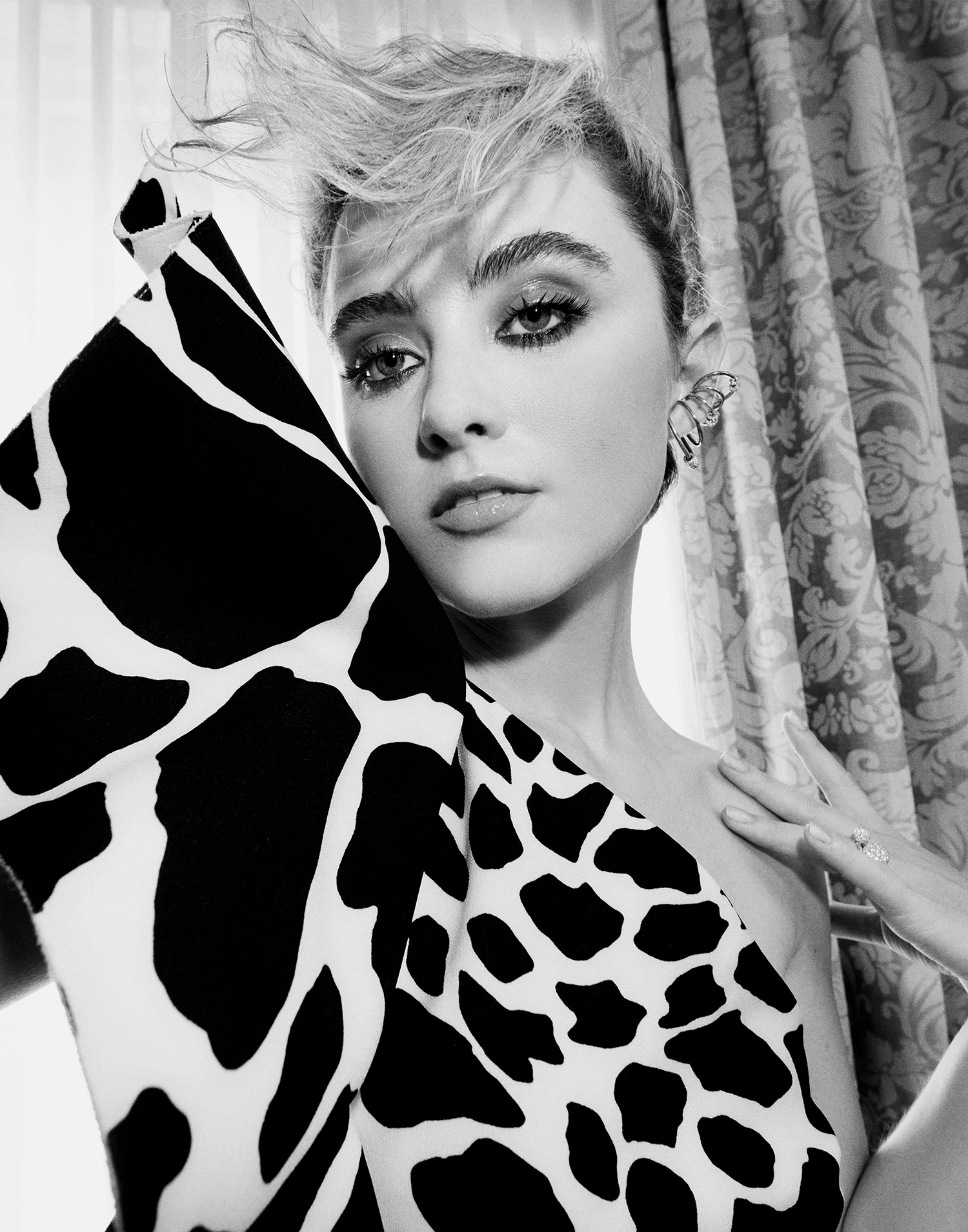 Lift You Up Read more